In the summer of 1945, as WWII drew to a close, the U.S. economy was poised on the edge of an uncertain future. In late 1940 for the United States to serve as the “arsenal of democracy,” American industry had stepped up to meet the challenge. U.S. factories built to mass-produce automobiles had retooled to churn out […]

via The Post World War II Boom: How America Got Into Gear — Pacific Paratrooper

I happened to run across this through a former colleague from my Alma Mater in Minnesota and decided to share this for this affects not only education in the US, but in other countries as well. This looks at the different scenarios that schools and institutions of higher education may be facing should we have another CoVid 19 wave and ways both the student and the teacher can plan accordingly. While some have predicted that the virus will go away, others, including yours truly, believe that the fight is not over yet and the virus will remain until a vaccine is made available for everyone.

After reading and hearing about possibilities for the fall semester, both in the higher ed and K-12 worlds, I think I finally have a grasp on the scenarios I and my students might face in the coming months. As I understand it, in order to be competent and caring instructors, all we need to do is develop syllabi for each of the following possible futures:

While covering the 75th anniversary of the end of World War II, this article came to mind as I came across it a while back. It looks at several women who survived the terror of Naziism and the Holocaust and lived to write their stories about it. Here are their stories….

The second talk I attended at the
Henley Literary Festival was given by Agnes Grunwald Spier – one of the
youngest survivors of the Holocaust. Agnes has just published a book called
‘Women and the Holocaust: In Their Own Words’.

In 1944, two years after her parents married, Hungary was invaded by the Nazis. Within months, Agnes’s maternal grandfather had disappeared, last seen on a bus stopped by Nazis searching for Jews (years later, the family discovered he had been murdered in the Auschwitz gas chambers).

In the meantime, Agnes’s father
was taken away by Hungarian fascists responsible for implementing anti-Jewish
legislation. Sent to the Russian Front, he undertook forced labour. Her mother
was left alone in Budapest, “surrounded by women, elderly people and children”.
Pregnant with Agnes, she moved into ‘alternative housing’.

Somehow, Agnes and her mother survived the war and the Budapest ghetto, Agnes’s mother valiantly continuing to…

The East Germany state of Thuringia has said its citizens can make their own choices with regards to the lockdown becoming the first place in Europe to end any formal rules. This does not follow Chancellor Angela Merkel’s advice of not moving too fast as the states compete to get their economies back going. Chancellor Merkel has made it clear the country is still “fragile” and “not out of the woods” with regards to COVID-19. Thuringia will lift its ban on mass gatherings, the compulsory wearing of facemarks in shops and a requirement for people to stay 1.5 metres apart.

The restrictions will be officially lifted on June 6.

Germany has been less affected by COVID-19 than many other European countries and began lifting its lockdown on April 20.

The rate of infection has been declining in the country, with only 431 new infections over the past 24 hours this weekend… 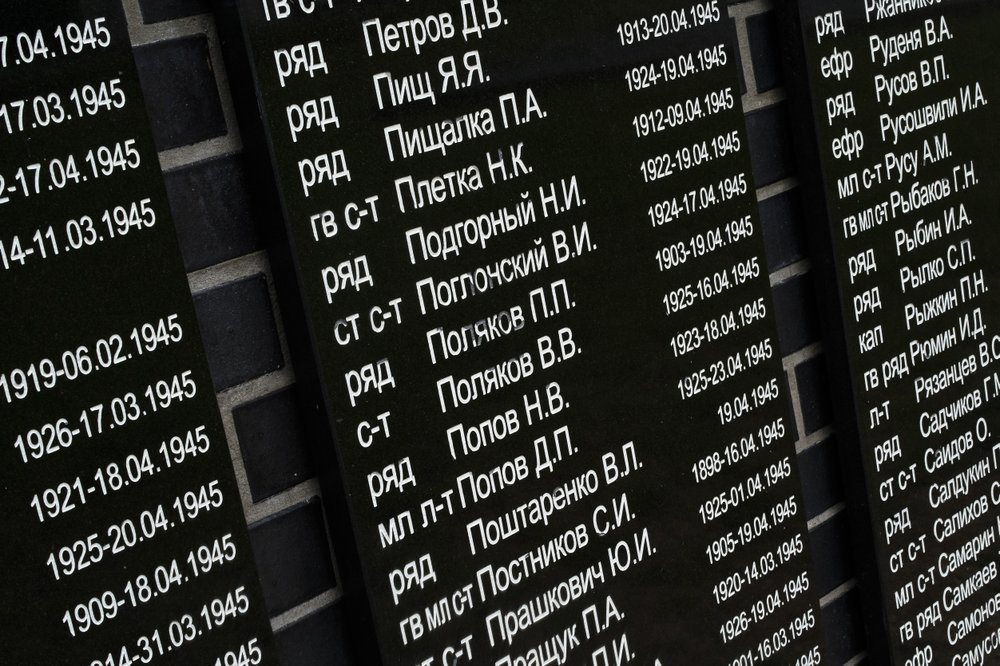 In this Thursday April 30, 2020 photo a view of the names of Soviet WWII soldiers killed in the battle at the Seelower Heights in 1945 at a war cemetery in Lebus, Germany. In eastern Germany, today’s verdant pastures were killing fields 75 years ago as the Soviet Red Army pushed toward the Nazi capital in the final weeks of World War Two. Volunteers from across Europe comb across the area looking for the remains of the thousands of missing soldiers, working from old maps and aerial photos to identify the trenches, foxholes and strongpoints where they could be buried. They strive to give the dead a proper burial, and wherever possible identify the remains to provide closure for families. (AP Photo/Markus Schreiber)

Thomas Siepert looks across the verdant grain field, glowing in the sun after a spring thunderstorm, as windmills slowly churn in the distance.

The Corona Virus has changed the world in many ways and aspects. This guest column shows us one way Covid-19 changed and that is the psychological aspect. After having gone through a rat race, this author found some time to take stock and make the changes necessary for the better of one’s physical and psychological well-being. Her story should serve as an incentive for all of us to consider.

Let’s start with the WHY. Why did we stop our world?…

Jonathan (my Husband) and I had reached a point in our lives where we wanted (and needed) to press the “pause” button. We have been working very hard for some time, and the last few years were challenging for both of us. Constant pressure and stress on the home and work fronts had impacted our bodies and minds and we were wondering – “when will it end?”. We had lost the delicate balance between our priorities in life and it seemed time was running away on us quicker than we could ever keep up.

Our next Wartime Bridge story takes us to northeastern Poland and to the town of Jastrowie. With a population of 8900 inhabitants, the community is located on the edge of the Gwda River valley. Germans have translated the river’s name into Küddow. During World Was II, Jastrowie was a stronghold for Nazi soldiers especially as a railroad line had existed and it was needed to ship war supplies and other materials to the areas needed, especially as soldiers on the eastern front tried to invade the Soviet Union and were only 60 kilometers away from Moscow by the end of 1941.

By the beginning of 1945, with the Nazis fighting a losing battle with the Allies encroaching Germany and its capital Berlin from all sides, Soviet troops were making strides as the soliders, tired and worn out from the fighting, were fleeing towards Germany, marching through Poland along…

Exploration of Literature, Cultures and Knowledge

The Social Vigilante
Pages Below the Vaulted Sky

Book blog with a speculative focus

"for the sake of humanity"... A small town American high school history project changes lives worldwide. These are the observations of a veteran teacher- on the Power of Teaching, the importance of the study of History, and especially the lessons we must learn, and teach, on the Holocaust. Click on "Holocaust Survivors, Liberators Reunited" tab above to begin.

Photographs and stories by Jim Grey

Americans' daily coffee ritual... Come right into our friendly, rhythmic ambiance, It’s a communal enjoin where you can always explore our breakfast, brunch and coffee selections.