My father and I had an argument once over how Germany was bordered when I was a child growing up during the 1980s. He claimed a concrete wall surrounded only West Berlin while I claimed that there was also a concrete wall that divided the country into two.

Apparently, we were both right, especially when we look at the towns of Hirschberg and Untertiefengrün, located on the Thuringian-Bavarian border, with the former town in Thuringia. The two towns are separated by the River Saale (Sächsische Saale is the official name) with Hirschberg having the majority of the population (2200 inhabitants). By the same token, however, the small Bavarian community with 130 residents seems much more modern than its crossborder neighbor.

According to history, the town of Hirschberg was first mentioned in the 12th century and had already built a castle and courtyard used for trading of livestock and crops. Untertiefengrün was first mentioned in the 14th century but became part of the community of Berg (Oberfranken) in 1978. Before the Berlin Wall existed, Hirschberg was well-known for its leather products, for a factory had existed for over 500 years, producing shoes, bags and leather pants, even during the times before 1989. In 1992, the factory went bankrupt and was forced to shut down. The entire 16 hectares of property was torn down, four years later. What’s left of the factory, became a museum for the town’s history and a park with lots of greenery.

When people first think of Hirschberg in terms of German history, they think of the infamous East German border crossing complex located at where the Motorway 9 betwen Berlin and Munich is now located. The complex was located on the northern end of the Rudolphstein Viaduct, approximately five kilometers west of Hirschberg.  Yet as one digs even deeper into the town’s history, one can see that the town really suffered a great deal after World War II. When the war was over, the Soviets took over Hirschberg as part of their zone (which became the GDR or East Germany), whereas the Americans took Untertiefengrün. This is where the history of the Saale River crossing comes in.

History books and postcards pinpointed the first crossing as being made of wood and built in 1699. Most likely it had been rebuilt many times over the course of 226 years due to wear and tear, combined with potential ice jams that damaged the structure. In 1925, a contract was let to build a concrete bridge. It featured a two-span arch design that was closed spandrel but whose arches featured step-like curves instead of the usual straight-line design.  The bridge was in use until right before the end of World War II, when Nazi soldiers, fleeing the encroaching American troops, detonated the bridge. At the conclusion of the war, only one of the two arch spans existed. American troops quickly built an improvisory span to temporarily connect Hirschberg and Untertiefengrün. However, this crossing was shortlived. Fearing the population drain caused by many residents fleeing Hirschberg and subsequentially, the Soviet Zone (later, the GDR), the bridge was subsequentially removed a short time later. Border fences were going up beginning in 1948 and culminated with the construction of the Berlin Wall in 1961.

The Wall separating the two communities at the Thuringian-Bavarian border went up at about the same time as the Berlin Wall, but on the Hirschberg side of the River Saale! That means people could no longer flee to Bavaria unless by car and through the border crossings at Juchhöh-Töpeln via Fernstrasse 2 south of Hirschberg. The Rudolphstein Viaduct, rebuilt in 1966, became option number two if residents were clever enough to smuggle their way through without being caught, or spied upon beforehand. It later became the lone option after the closure of Fernstrasse 2 at the border.  It was double torture for almost a half century- not being able to cross freely,  let alone not being able to swim nor fish in the River Saale. While Hirschberg was still producing leather during this dark period (under the auspisces of the GDR government), these were dark times.

Fast forward to 30 December, 1989. It was over a month and a half since the Fall of the Wall and at 8:00am that day, another improvisory bridge was built at the location of the former crossing. Hundreds of residents crossed the bridge into Bavaria and back at the ribbon-cutting ceremony. Their crossing was back, and the walls have come down. Yet it also marked the beginning of changes to come. Many who were scarred by the Wall and the attempts to be controlled by the government were the first to flee to the West. Others left when the leather factory closed down two years later.  It became the Bridge of Opportunity for many looking for a better life elsewhere, while leaving the dark past behind them for good. 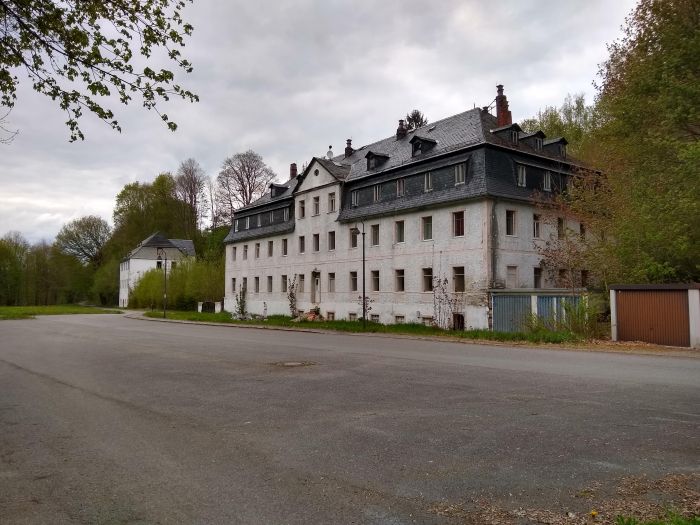 Fast forward to 2019, 30 years after the Fall of the Wall. A permanent crossing over the River Saale is 10 years old- a concrete slab bridge with Warren Truss railings. The towns of Hirschberg and Untertiefengrün are united. But things are much different now. Changes in the economic structure combined with globalization has turned the two communities into “ghost towns.”  One can see people walking the streets, farmers harvesting their crops despite the droughts that have devastated Europe in its second year. Church bells are ringing. But on both sides of the River Saale stand dozens of empty buildings. Remnants of schools and the leather factory still stand on the Hirschberg side. Cafés and hotels that used to host American troops and tourists on the Untertiefengrün side are empty with “For Sale or Rent” signs on the windows waiting for the next tenants to take over.  While the former German border crossing at Rudolphstein Viaduct has become restaurants, hotels and service stations hosting thousands of commuters, truckers and tourists daily along the Motorway 9, the communities of Hirschberg and Untertiefengrün, once divided by the Wall along the Saale, have their bridge back but have long become forgotten communities that withstood the test of time, even when divided.

After many years of hardship caused by the division of Germany into two, the two communities are going to sleep now, hoping that the next generations that come will appreciate what the two have to offer, aside from their history, which is vast farmland with lots of hills and a deep, heavily forested River Saale- no longer a border between East and West but a river where people can hike and bike along it, swim or fish in it, and take pictures, all without the dangers of being watched.

More photos of Hirschberg and Untertiefengrün based on my visit can be found here:

There is a website devoted to the former border between East and West Germanys, photographed in the 1980s. To access the website, click here. Some pics of the border and crossing in Hirschberg are included there. 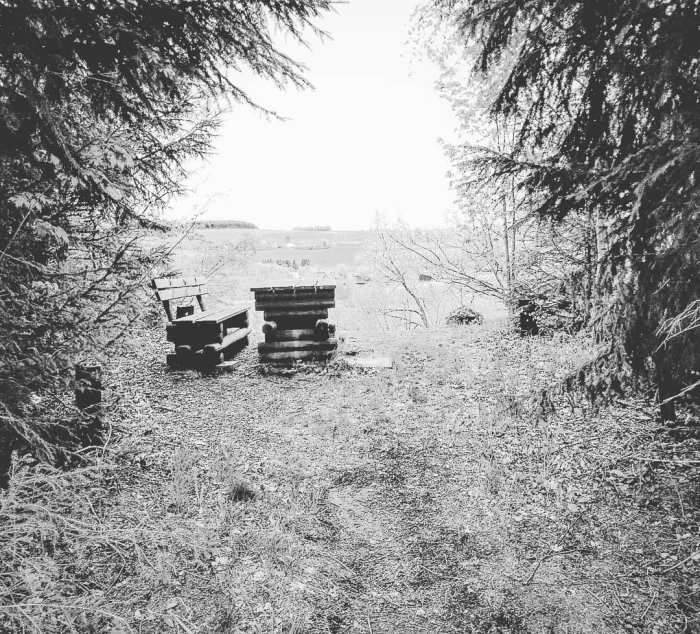 During a recent hike along the Thuringian/Bavarian border, I happened to find this interesting place: a picnic area on the Thuringian side with a gorgeous view of Bavaria and the River Saale. Little did I realize that there had been four rusty steel fence posts- I-beam style- that was found at every single corner of the picnic area; behind the bench and the table.

I bet the Soviet troops had just as much fun with the picturesque view before 1989.

What was here before this picnic area was established?  Tell us about it. This was found between the Rudolphstein Viaduct (an article can be found here) and the village of Sparnberg, located 1 km west of the bridge and 3 km west of Hirschberg.

Task: Make a story about this scene.  🙂

Very Many Much Yes

Football, Soccer And Everything In Between
Expat Eye on Germany