Our last stop on the 2018 Christmas market tour keeps us in the state of Saxony but takes us way out west, to the wildest of west, namely the Vogtland. The reason we say this is for three reasons: 1. The Vogtland region is laden with rich forests, a large number of reservoirs and lakes and hills. For some of the rivers in the region, such as the White Elster, Zwickau Mulde, Eger and other notable creeks, the region is their starting point. 2. The region is rustic with wooden houses along the countryside, buildings with wooden facades, etc. Despite it being a part of East Germany with its communist housing, the region has a lot of attractions, competing with the likes of the Fichtel Mountains in Franconia (Bavaria), Thuringian Forest and even the Ore Mountains (Czech and German sides). 3. As far as activities are concerned, the Vogtland is filled with outdoor activities year round, including skiing, horseback riding, biking and hiking, just to name a few. And lastly, the Vogtland is the archrival to the Ore Mountain regions in terms of woodcrafting. Especially with regards to Christmas arches (Schwibbogen), pyramids, and other figurines typical of Christmas, the Vogtlanders pride themselves on their work and there has been a debate as to which regions these products were made, let alone their origins.

But that is for another time. 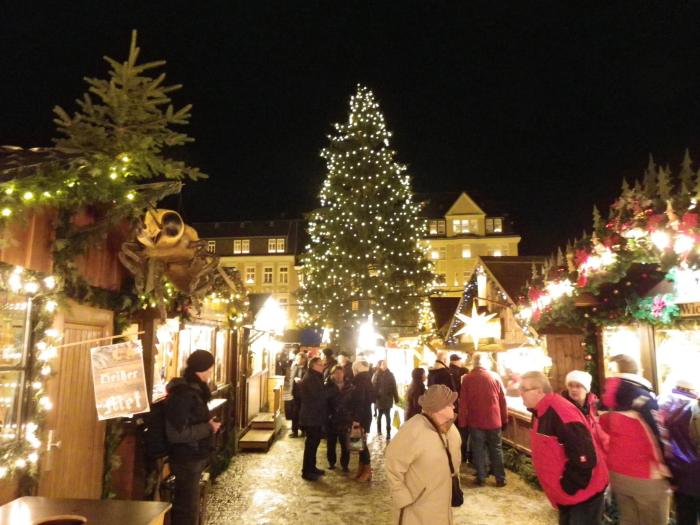 The largest city in the Vogtland is our focus of the Christmas market and is one that has a tradition and a history. Plauen has a population of 65,400 inhabitants and is the second closest city in Saxony to the Czech border behind Oberwiesenthal. At one time, the population had been hovering over 120,000 inhabitants before the two World Wars decimated much of it. Since 1945, it has been under the mark and decreasing steadily as people have emigrated away for better jobs in neighboring Bavaria and in bigger cities. It is 30 kilometers northeast of the nearest city of Hof (also in Bavaria) but 45 kilometers southwest of Zwickau. The White Elster River as well as the Syra and Mühlgraben flow through the city, and the city is rich with historic bridges, big and small, spanning them in and around the city. They include (in the city) the Friendensbrücke, the second oldest known bridge in Saxony in the Alte Elsterbrücke (built in 1228) and the brick stone viaducts at Syratal and Elstertal. The Göltzschtalbrücke, which is located 10 kilometers to the north, is the largest viaduct of its kind ever built.  Apart from three federal highways, Plauen is also served by the Motorway 72, as well as three different raillines, including the Dresden-Hof-Nuremberg Magistrate, the Elster route going to Gera and Leipzig as well as the Vogtland route going to Cheb (CZ).

Despite having lost 75% of its buildings during the waning days of World War II through ariel bombings, much of Plauen’s architecture has been rebuilt to its former glory and still functions for its original purposes. This includes several churches, such as the Johanniskirche, Lutherkirche, and Pauluskirche, the Nonnenturm, the castle ruins of Schloss Plauen, the two city halls- one built in 1385; the other in 1922 which features a tower with clock- and several other historic buildings flanking the two market squares- Altmarkt and Klostermarkt.

Plauen has a lot to take pride in- its green hills and valleys, its beer, its theater and  orchestra, but it is world famous for its Plauener Spitze, a type of pattern fabric that is carefully orchestrated by needles and other cutting tools. An example of such a Spitze can be found here:

Inspite of this, Plauen is also famous for its Christmas market, which is the largest in the region. It covers three-fourths of the city center, covering Altmarkt, extending along Obere Steinweg and Rathausstrasse, part of Klostermarkt and ending at the shopping center Stadtgallerie. Yet most of the shopping and eating possibilities can be found at Altmarkt and the shopping center. Because of parking issues, only the tree and some street performances were found during my visit at Klostermarkt.

Another area in the city center that was somewhat left out was the area around the church, Johanniskirche. While church services commenorating the birth of Christ, combined with concerts, were taking place there, the lot was empty with no cars around. Given its size, there could have been some potential to have some religious exhibits and/or booths in and around the church to encourage people to visit them before or after visiting the church. This was something that was found at some other Christmas markets, most notably in Glauchau and Zwickau as well as in some places in Berlin, Dresden and Nuremberg.

To summarize in that aspect, the space availability for Christmas market booths and events is somewhat misaligned and the focus should be less on consumption and more on the holiday and religious traditions that Plauen offers and what is typical for the Vogtland region. That means aside from the church area, Klosterplatz should be filled in a bit with some booths and other holiday events and less glamour for the shopping area for Christmas markets are an outdoor event and not indoor.  A note to some of the city planners for future reference.

Aside from this, the market itself features a combination of shopping possibilities in the Stadtgallerie and traditional products and foods in the Altmarkt. Both market appear to be well-decorated, with the Stadtgallerie having somewhat too much glamour with the Christmas decorations, thus creating more traffic for shoppers than what is needed at the market itself. Again, an imbalance that needs to be corrected. The Altmarkt itself is perhaps the nicest of the Christmas market in Plauen. The booths consist of small mahogany huts made with real wood from the Vogtland region, all decorated with spruce and pine tree branches as well as other forms of decorations. There are several picnic tables and benches, all made of cut-up wood; some of them have shelters in case of inclimate weather.

Much of what the Christmas market at Altmarkt offers is local specialties, such as the woodwork products made in the Vogtland, such as the pyramid, Christmas arch, incense products and figurines that are religious based. For eateries, the market offers not only local foods and drink, but also some international products. Most popular at the market include the Bemme- a bread with fat and pickles, in come cases with liver sausage. Then there is the Baumkuckenspitze, a layered, donut-shaped cake covered in chocolate; some of which with a thin-filling. Holzofenbrot that is cooked in a wood-burning oven is one that is most recommended, and one of the booths had a mixture of both local and international specialties. Especially in the cold weather, these bread products with are really good and filling. 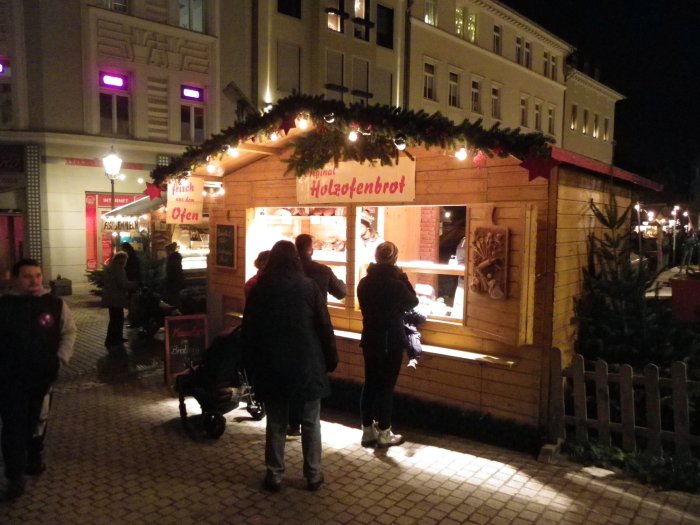 As we’re talking about international specialties, the market offers products from the Middle East and parts in Europe. Included in the mix is from the Netherlands, where I had a chance to try different kinds of Gouda cheese- those that are sometimes 2 years old and more than ripe. Regardless of what kind, the cheese is highly recommended, and the salespeople selling them, we had a chance to talk about different cultures between Germany, the US and the Netherlands. Their booth features a good place to chat, where even Father Christmas and the angel can entertain themselves over cheese: 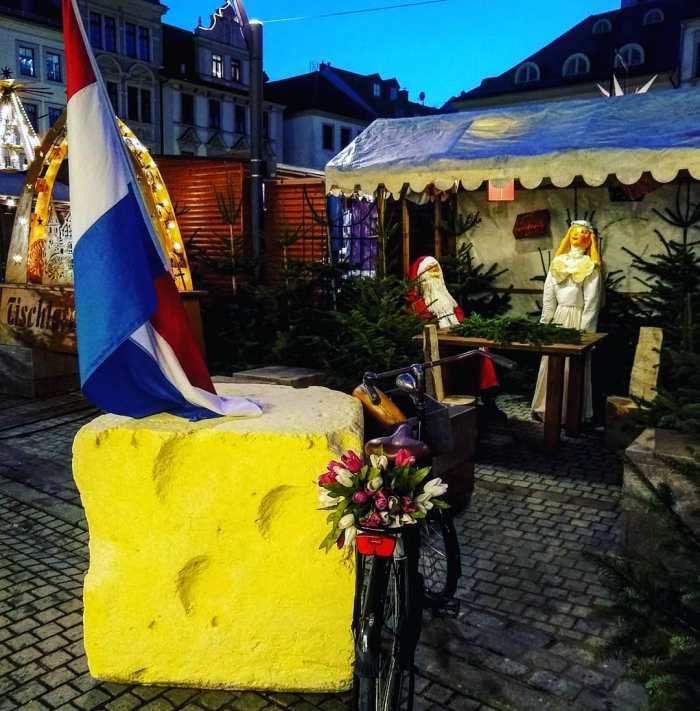 Apart from two different pyramids- one of which is over a century old, one can also spend time at the Spitzenmuseum at the older city hall, which by the way provides a great backdrop to the market together with the tower of the newer city hall, which one can tour the place and enjoy the view of the city and its landscape.

Plauen’s Christmas market features a combination of culture and history all in a historical setting. Culture is in reference to the local products that are offered, especially at the Altmarkt, and history is in reference to the historic setting the market has- to the south, the church and to the north, the two city halls. The market is well-visited and is not so crowded, although my visit was after the first Advent. Yet the magnet of the shopping center next door does raise some concern as to how to balance out the visitors and better utilize the space of Plauen’s city center. Having open but unused space makes a city center rather empty, especially at the time of the Christmas market. However, when planned better and through cooperation with retailers and property owners, Plauen can have a well-balanced Christmas market that is well-balanced in terms of visitors but also whose themes would make it attractive to visitors coming from Saxony, Germany, Czech Republic and beyond……

Americans' daily coffee ritual... Come right in to our friendly, rhythmic ambiance, It’s a communal enjoin where you can always explore our breakfast, brunch and coffee selections.

This blog is the result of an idea that's in my head for already quite a time. I love languages, cultures, travel and lifestyle topics and would like to write articles about interesting topics related to these topics. This blog is more a project that I start for myself. Of course, I will be happy if my content is also a valuable source for others, so that we can share our ideas and experiences.

Everyone has a story if you give them a voice.

thoughts from an american expat living in hessen

advice, tips and resources for your language learning

ANOMALOUS ME
Nuts and Squirrels