A couple weeks ago, I came across a nice long story of what a Liberal is in the United States through a fellow American ex-pat residing in Flensburg, who had gotten it from another person, who had gotten it from another person, who had…… Well, to put it just- it is a chain letter. And one that needs clarification for the definition of conservative and liberal have become so misinterpreted in ways that the public simply does not understand. And before a “leader” tries to tell you what he thinks these type of people are, in the form of liberals (when in all reality, he’s not even CLOSE to being the conservative that we grew up with), let’s have a look at the definition of a “Liberal” from this writer’s point of view, just for the purpose of thinking about it before starting a conversation to reason with those who think Liberals are Socialists or what-have-yous. It’s far different than what we think:

“An open letter to friends and family who are shocked to discover I’m a liberal (likely nobody in my individual case.) I’ve always been a liberal, but that doesn’t mean what a lot of you apparently think it does.

Let’s break it down, shall we? Because quite frankly, I’m getting a little tired of being told what I believe and what I stand for. Spoiler alert: Not every liberal is the same, though the majority of liberals I know think along roughly these same lines:

I think that about covers it. Bottom line is that I’m a liberal because I think we should take care of each other. That doesn’t mean you should work 80 hours a week so your lazy neighbor can get all your money. It just means I don’t believe there is any scenario in which preventable suffering is an acceptable outcome as long as money is saved.”

To the writer who posted this and had this spread around, you are one of courage in getting this out. We need more of you out there. And to the friend in Flensburg, many thanks for allowing me to get this out! 🙂

I learned about the mass shootings that occurred in Pittsburgh on the 27th of October, at the Tree of Life Synagogue in the suburb of Squirrel Hill. It was not far away from some of my friends who live there, one of them happens to be raised of Jewish faith. Still they are connected to the 11 people who were slain and six more who were injured, with family and friends, congregation members and the community traumatized. And as the world mourns the losses and brings people together, I found a Jewish poem that focuses on love and sharing, even in the time of one’s passing. It would be inappropriate to comment on this (as I have a couple pieces of work to follow) nor introduce the Kaddish further. Therefore, this piece is being presented, dedicated in memory of those whose lives were either cut short senselessly or were altered by the events forever. We must not forget that love will forever prevail over hate, no matter how certain people try. God bless you whereever you are: 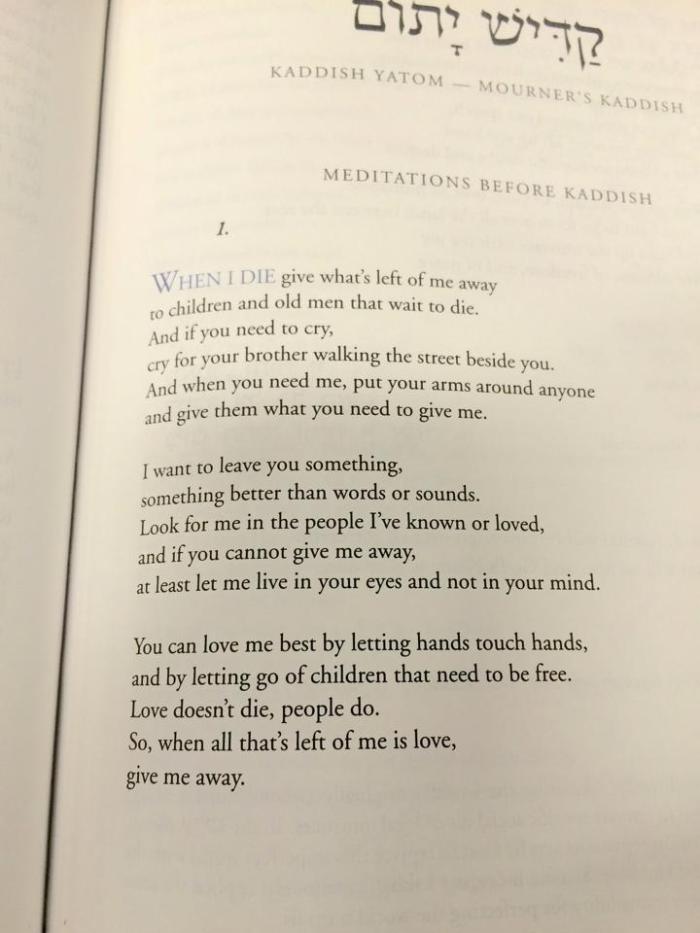